From a DNR press release

The Michigan Department of Natural Resources recently issued a Michigan Deer Harvest Survey Report on the 2014 hunting seasons indicating that roughly 615,000 hunters statewide harvested a total of roughly 329,000 deer. The harvest represents a drop of 15 percent from 2013.

DNR Director Keith Creagh said that like Michigan’s deer population, the state’s deer harvest numbers have risen and fallen in an ebb-and-flow pattern since the early 1960s. 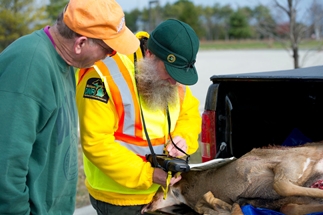 “The number of deer harvested hit a low in the early 1970s at below 100,000 statewide,” Creagh said. “With mild winters and changing forest conditions, deer populations then rose and hunter harvest climbed to more than 400,000 by the late 1980s.”

After tough back-to-back winters in the mid-1990s, the harvest followed the population steeply downhill, but rebounded again to nearly 600,000 by the end of the decade. Since then, deer harvest has remained below 500,000 since the early 2000s.